Any traveler arriving to Polignano a Mare cannot leave without having taken a boat trip to discover the beautiful sea caves and a cobalt blue sea and crystalline that bathes these rocky coasts overlooking the sea.

The tour leaves every two hours from the Port of Polignano a Mare (Cala Ponte Marina) and during the two-hour journey, aboard a modern and new boat of six and a half meters, launched in 2018, you will have the chance to see Cala Incina, a sixteenth-century tower that stood in defense of the coast to counter the arrival of invading peoples from the sea, like the fearsome Saracens. Cala Incina is a natural harbor that marks the border between Monopoli and Polignano.

Nearly a mile to the north you can already see the first caves, including the Grotto of “Pozzo Vivo”and the Grotta dei Colombi (Pigeon’s cave), a natural cavity characterized by a hole in the rock, through which penetrates the sunlight that illuminates the cave and its clear waters.

Sailing further north you can see from the sea the small natural harbor inhabited by fishermen, called Porta Alga, with its picturesque white houses and the trulli placed at the top. 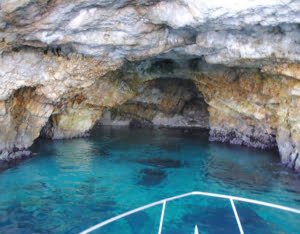 Just in front of Porta Alga stands the rock of the Hermit, also known as the islet of San Paolo. This small rock contains a legend that there really lived a hermit, returning from the holy land, probably around the eleventh century.

After the rock of the hermit, you will walk along the cave of the Monache, a place in ancient times frequented by the nuns of a nearby convent, in search of tranquility and privacy. In the cave you can see rock seats where you can imagine the nuns gathered in contemplation.

Once in front of the ramparts of Polignano you will find yourself in front of a spectacle of rare beauty, to which even the locals can never get used to each other, each time experiencing the same admiration. The stone houses with alleys and terraces overlooking the sea and the wonderful Grotta Palazzese, which stands out like a diamond set in so much beauty. You will be enchanted by the beauty of the blue grotto and the Archiepiscopal Cave, as well as by the very special and evocative beach of Lama Monachile, so called because once you could spot the monk seals.

During the tour you will have the opportunity to dive and swim, but we do not want to reveal too much, the tour will reserve many other surprises, stories and anecdotes that you will discover in person, so do not miss this wonderful experience!

In case of rough sea in Polignano (north wind) we can take a 1 hour ride to the south coast of Monopoli, with a stop to swim.

Receive news, offers and discounts in your e-mail box!